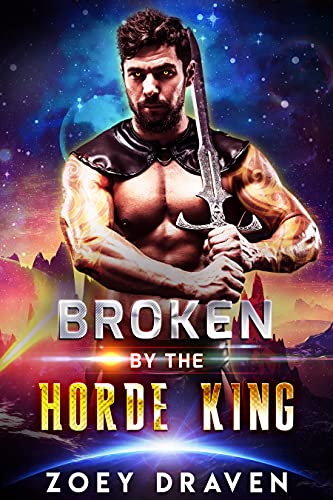 Broken by the Horde King is currently my favorite book in this series. The relationship between Kiran, our Hero, and Maeve, our Heroine, was honestly incredibly.

Kiran and Maeve have known each other essentially their entire lives.  Maeve fell in love with her best friend, and when she presented herself to him, he rejected her.  Even though this is a romance novel, even though we know it is going to end happy, my heart broke reading the beginning.

This entire book, is about growth, and I am living for it.  Maeve, after she was rejected, was broken.  She had to learn how to live without her best friend, the man she had fallen in love with, and learn to go on.  Everyone in her town pitied her, and she had to figure out how to deal with that.  On the opposite side, Kiran had to learn how to live without his fated mate, because he didn’t think he would succeed as a Horde King.

They are apart for 9 years, and never stop thinking about each other.  But in those 9 years, he runs a successful Horde, and she has learned and is on her way to becoming a healer.  Even separate, even with the trauma, and the regret, they are actively working towards their dreams.  I mean, most of the time when I read a book like this, the minute the main characters are separate they are about as useful as a slice of bread until they come back together.

BUT NOT IN THIS BOOK.  NOOOO.  Zoey had to take your emotions and wreck them.  Because these characters were getting on just fine without each other.  And when they finally do get back together, the hurt and the problems are not magically gone, which also happens quite often.  Instead that hurt, that betrayel, and that regret is front and center and Kiran and Maeve have to figure out how to deal with it.  Because the trust between them was gone, and had to be rebuilt.

The worst part about this book, in a REALLY good way, was the communication problems.  Kiran and Maeve never learned how to communicate with one another when they were angry and frustrated, or sad.  They really only had good days together.  So when the event that separated for the 9 years happened, they had no idea how to handle that.  If they had known, if they had been able to communicate, it would have been an entirely different book.  Zoey really sat down and said “I’m going to write a book that will show you, that you need to better communicate.”

Overall – As I said, this is my favorite book out of all five of them thus far.  It continues the overarching plot of the first three books and I enjoy how Zoey did that.  That being said if you only read one of these books, this would be my choice.  It can be read as a standalone, but don’t do it.  Read all of them, it is worth it!