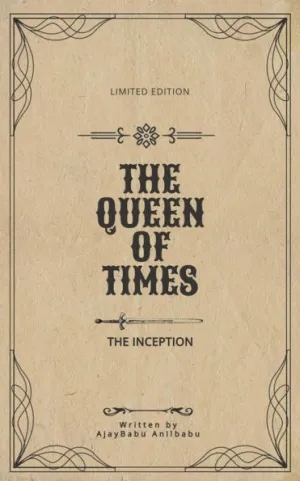 While The Queen of Times : The Inception isn’t a nonfiction book, with the story Ajay Babu Anilbabu portrays you almost wish it was.  I love that the author took the time to research an event and person in time and create an entire story around that, something you don’t often see.

This book is based off of Razia Sultana who was the first and only woman ruler of Delhi Sultanate, an Islamic Empire from centuries ago, putting our setting (if I am getting this correct) in what is now India.  I love history, but I hate history class.  So any opportunity to learn about an environment and setting I would not otherwise get to learn about is a wonderful thing for me, so I was thrilled at the setting and time period for The Queen of Time.

Unfortunately, I do have to say I did not finish this book, and the reason for that is not because it was bad.  Ultimately I made it approximately 30% of the way through this book before I had to put down, and the main reason is you can tell the author does not speak English as their first language.  Because English is not the author’s first language, it takes what I believe to be an incredible story, and turns it into something that reads as almost text bookish, and ultimately unenjoyable to read.  I found myself multiple times wishing I spoke and read other languages, and that I could read this work in the authors original language because I was enthralled with the story.

I also found that this book needed a pronunciation guide. As I mentioned above I am not good with other languages.  While I am incredibly familiar with English, that’s about it.  And this book has some incredible looking names that I am sure sound melodious and wonderful if you say them correctly.  But I do not know how to say them correctly and I really wish I did. For instance, we are being told of the story Naziaa Sultan, and I have no idea how to say the name Naziaa, but I really want too.  It sounds so incredibly and powerful.  And as you read more about this character you find she is a total badass!  Of course I wanna say her name correctly!  I find that a pronunciation guide is typically the one thing most authors do not think to include (myself included) because we are so used to the words and how they are supposed to sound, we forget other people cannot read our minds.

Overall –   The parts of this book I was able to read were wonderful, if not a bit text bookish in how the wording came across.  Ultimately I was not able to finish this book which is a real shame because I am highly interested in the overall story.

The Queen of Times : The Inception (The Queen Trilogy) – Ajay Babu Anilbabu

Cost* – Ebook is $0.99 and can currently only be bought at Barnes and Noble