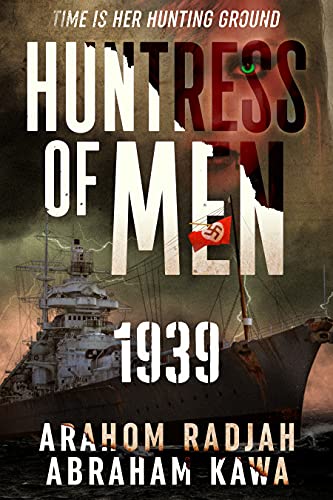 Huntress of Men 1939 Book 1 is a unique book for me in that I incredibly liked the story and plot, but did not actively like the book.

I am fully aware that statement makes little to no sense.   How can you both really like a book, but also not like it?  Well, to be frank, it is written in a style that really is not for me.  I like long descriptions, and this book does not really offer them.  Not to say that it is not descriptive, but the descriptions it uses are short and concise, painting a brutal picture in your mind.

The plot of this book was incredibly interesting to me, because it centers around WWII, while also being a fantasy novel centering around a vampire.  These are two things I don’t think I have ever seen mixed together before (not that it hasn’t been done) and it was done well.  Our setting is a boat called “The Ruth” that in addition to being home to its captain and crew, is also the temporary home to 900 Jewish people, trying to escape Germany.  They have been denied entry at multiple ports in multiple countries, and are running on fumes and dwindling hopes.  Because this book is also about a vampire, the author could have easily glossed over the history of what had happened, but does not.  You actively ached with the Jewish individuals on the boat as they tried to find sanctuary.

If you are thinking the main adversary of this book would be the vampire, you would be incredibly wrong.  It is instead a gentleman named Karl, who gets such an interesting introduction.  I liked Karl as a character, but man did I hate him as a person.  If I had to describe him, he is that school yard bully that thinks he is the toughest person in the world, but runs crying to his mom the minute he does not get his way.  His introduction did an incredible job of showing us who he would be as a person, and it gave good reasons as to why.

This book does a lot of things well.  For starters, it has a “captain’s log” that happens throughout, which is such a creative idea to portray what is happening in the book, without having to bog down the book with long passages that are not necessarily needed.  Instead, its just a few quick bullet points detailing what has been happening over the course of a few days, and then it shoves you right back into the story.

What this book does best though, is writing the vampire.  This species of vampire is not written like other species I have seen in other books, which is fabulous.  I love when authors take the time to put their own spin on old lore’s.  While the author does describe who the vampire ends up being, I am so appreciative that instead of going out of their way to describe them as sexy, and seductive, the vampire is described as powerful, fierce, captivating.  It is a character that has been alive for 5000 years, and it shows.  So often when I read anything about vampires, they end up being this super sexy, all sexual object in a book.  Not the case for this book.  At one point in time, this vampire is actually described as a lizard, and I feel like I shouldn’t get excited about this, but it was such a breath of fresh air while reading this.

What I didn’t like about this book, is that it is not an easy book to put down and pick back up.  Normally if I do not finish a book in single sitting, I can pick it up the next day, and fairly easily figure out where I was, and what was happening.  That is not really the case for this book, and I would often have to backtrack quite a bit to try to remember what happening, or just read blindly and eventually catch up.

Overall – I both really enjoyed this book, and really did not enjoy this book.  I do think the plot was excellent and the characters were real and believable.  Some of the takes the author had were such a breath of fresh air, and made it such a joy to read.  However, this is not the typical book that I personally like to read.  However, if it something you would like, you are in luck, because there are 9 other books in this series.